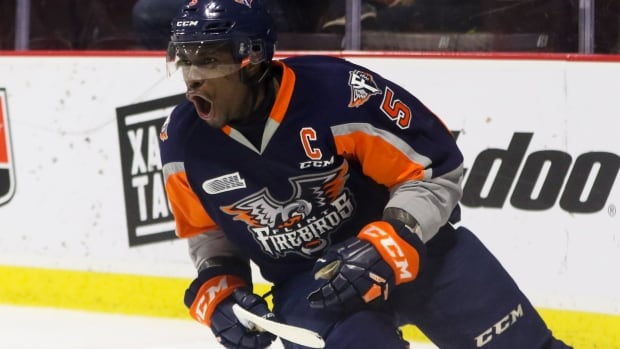 A player who was the target of a racist taunt during a Ukrainian Hockey League game on the weekend says he won’t play in the league again until the opponent who made the gesture is disciplined.

Jalen Smereck, an American defenceman for HC Donbass, says he is taking a league of absence until HC Kremenchuk player Andrey Denyskin is “suspended and removed from the league.”

Denyskin taunted Smereck, who is Black, with a gesture that mimed unpeeling a banana and eating it during a game Sunday between Kremenchuk and Donbass.

The gesture was captured on video and has been widely circulated. Denyskin was ejected from the game and faces further discipline from the league.

“These situations are very tough and I am a big believer in standing up for what is right,” Smereck posted Tuesday on Instagram. “I have been putting a lot of thought into what comes next for me in my career but as of right now I have decided that I will be taking a personal leave of absence from HC Donbass and I will not play another game in the (Ukrainian Hockey League) until Andrey Denyskin is suspended and removed from the league.”

Denyskin apologized for the gesture in a social media post that has since been deleted.

Donbass said in a statement that it is “outraged” by Denyskin’s actions. The International Ice Hockey Federation and NHL Players’ Association have also condemned the gesture.

“This a direct assault on the ideals and values of our game, and we will ensure that all necessary ethics violation investigations occur to ensure that this behaviour is sanctioned appropriately,” IIHF president Luc Tardif in a statement on Monday.

Smereck, from Detroit, played 17 games last season with the Tucson Roadrunners, the AHL affiliate of the Arizona Coyotes.